True fear is a gift. Unwarranted fear is a curse. Learn how to tell the difference.

A date won’t take “no” for an answer. The new nanny gives a mother an uneasy feeling. A stranger in a deserted parking lot offers unsolicited help. The threat of violence surrounds us every day. But we can protect ourselves, by learning to trust—and act on—our gut instincts.

In this empowering book, Gavin de Becker, the man Oprah Winfrey calls the nation’s leading expert on violent behavior, shows you how to spot even subtle signs of danger—before it’s too late. Shattering the myth that most violent acts are unpredictable, de Becker, whose clients include top Hollywood stars and government agencies, offers specific ways to protect yourself and those you love, including…how to act when approached by a stranger…when you should fear someone close to you…what to do if you are being stalked…how to uncover the source of anonymous threats or phone calls…the biggest mistake you can make with a threatening person…and more. Learn to spot the danger signals others miss. It might just save your life.

Each hour, 75 women are raped in the United States, and every few seconds, a woman is beaten. Each day, 400 Americans suffer shooting injuries, and another 1,100 face criminals armed with guns. Author Gavin de Becker says victims of violent behavior usually feel a sense of fear before any threat or violence takes place. They may distrust the fear, or it may impel them to some action that saves their lives. A leading expert on predicting violent behavior, de Becker believes we can all learn to recognize these signals of the “universal code of violence,” and use them as tools to help us survive. The book teaches how to identify the warning signals of a potential attacker and recommends strategies for dealing with the problem before it becomes life threatening. The case studies are gripping and suspenseful, and include tactics for dealing with similar situations.

People don’t just “snap” and become violent, says de Becker, whose clients include federal government agencies, celebrities, police departments, and shelters for battered women. “There is a process as observable, and often as predictable, as water coming to a boil.” Learning to predict violence is the cornerstone to preventing it. De Becker is a master of the psychology of violence, and his advice may save your life. –Joan Price

A Q&A with Gavin de Becker 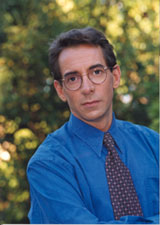 Question: In today’s world, where terror and tragedy seem omnipresent, the fear of violence never seems more heightened. Is the world a more violent place than it ever has been?

Gavin de Becker : Your question contains much of the answer: today’s world, “where terror and tragedy seem omnipresent…” The key word is “seem.” When TV news coverage presents so much on these topics, it elevates the perception of terrorism and tragedy way beyond the reality. In every major city, TV news creates forty hours of original production every day, most of it composed and presented to get our attention with fear. Hence an incident on an airplane in which a man fails to do any damage is treated as if the make-shift bomb actually exploded. It didn’t. Imagine having a near miss in your car, avoiding what would have been a serious collision–and then talking about every hour for months after the fact. Welcome to TV news.

To the second part of your question, No, the world is not a more violent place than it has ever been, however we live as if it were. The U.S. is the most powerful nation in world history–and also the most afraid.

Question: Your bestselling book The Gift of Fear gives many examples to help readers recognize what you call pre-incident indicators (PINS) of violence. What role does intuition play in recognizing these signals?

Gavin de Becker: Like every creature on earth, we have an extraordinary defense resource: We don’t have the sharpest claws and strongest jaws–but we do have the biggest brains, and intuition is the most impressive process of these brains. It might be hard to accept its importance because intuition is often described as emotional, unreasonable, or inexplicable. Husbands chide their wives about “feminine intuition” and don’t take it seriously. If intuition is used by a woman to explain some choice she made or a concern she can’t let go of, men roll their eyes and write it off. We much prefer logic, the grounded, explainable, unemotional thought process that ends in a supportable conclusion. In fact, Americans worship logic, even when it’s wrong, and deny intuition, even when it’s right. Men, of course, have their own version of intuition, not so light and inconsequential, they tell themselves, as that feminine stuff. Theirs is more viscerally named a “gut feeling,” but whatever name we use, it isn’t just a feeling. It is a process more extraordinary and ultimately more logical in the natural order than the most fantastic computer calculation. It is our most complex cognitive process and, at the same time, the simplest.

Intuition connects us to the natural world and to our nature. It carries us to predictions we will later marvel at. “Somehow I knew,” we will say about the chance meeting we predicted, or about the unexpected phone call from a distant friend, or the unlikely turnaround in someone’s behavior, or about the violence we steered clear of, or, too often, the violence we elected not to steer clear of. The Gift of Fear offers strategies that help us recognize the signals of intuition–and helps us avoid denial, which is the enemy of safety.

Question: Your latest book, Just 2 Seconds, has been called a “masterpiece” of analysis on the art of preventing assassination. It contains an entire compendium of attacks on protected persons across the globe. What motivated you to put together such a definitive reference? What tenets can be applied to one’s everyday life?

Gavin de Becker: Most of all, we wrote the book we needed. My co-authors and I had long looked for an extensive collection of attack summaries from which important new insights could be harvested. Unable to find it, we committed to do the work ourselves, eventually collecting more than 1400 cases to analyze. Many new insights and concepts emerged from the study, and the one most applicable to day to day life, even for people who are not living with unusual risks, is to be in the present; pre-sent, as it were. Now is the only time anything ever happens–now is where the action is. All focus on anything outside the Now (the past, memory, the future, fantasy) detracts focus from what’s actually happening in your environment. Human being have the capacity to look right at something and not see it, and in studying such a crisp event–the few seconds during which assassinations have occurred–Just 2 Seconds aims to enhance the reader’s ability to see the value of the present moment.

Specification: The Gift of Fear and Other Survival Signals that Protect Us From Violence

There are no reviews yet.

Luluato is an online store where you can find the best Amazon products in different niches.

We know that it is hard to find the awesome products on Amazon that suits your needs best. You spend hours if not days researching your desired product on Amazon but none fits your needs. We are here to help you.